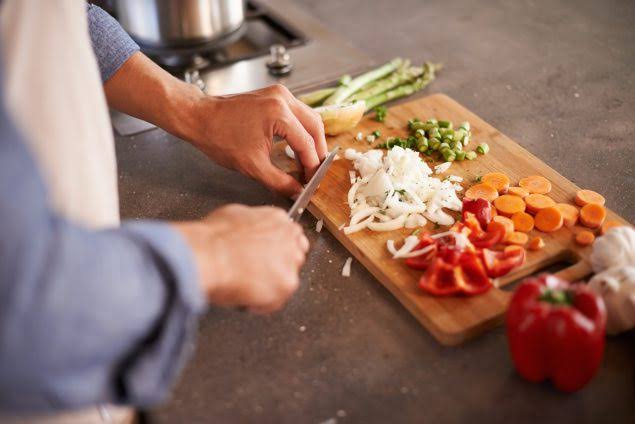 No one ever sits down to a meal thinking they’re going to get food poisoning, but it happens to approximately 48 million Americans every year, according to the Centers for Disease Control and Prevention (CDC). And, as you will know if you were unfortunate enough to ever be one of them, it’s no minor thing.

“We have to take foodborne illness seriously,” says Martin Bucknavage, senior food safety extension associate at the Penn State Department of Food Science in University Park, Pennsylvania. “When somebody does become ill from food poisoning, it can be two to three days of severe vomiting and diarrhea, and you may have ongoing symptoms and malaise for a number of days after that.” In rare cases —about 3,000 a year —foodborne illness can even be fatal.

Warm weather and holidays can be especially problematic times because the temperature is right for the pathogens that cause foodborne illnesses to thrive, and food is often left unrefrigerated for several hours, says Caroline West Passerrello, MS, RDN, LDN, a community coordinator and instructor at the University of Pittsburgh and a spokesperson for the Academy of Nutrition and Dietetics.

The good news, says Bucknavage, is that there is a lot consumers can do to protect themselves against foodborne illnesses. Simply by following some basic safety guidelines, which mostly involve properly cleaning cooking and prep surfaces, washing your hands often, and cooking foods to the correct temperatures, can significantly lower your risk for food poisoning.

While the dates printed on food packages are a measure of quality, and not necessarily safety, it is wise to heed expiration dates on highly perishable items such as dairy, meat, and poultry products. The Food Safety and Inspection Service of the U.S. Department of Agriculture outlines the different types of product dating on its website.

Do not buy any food with a “sell-by” date that has passed or use any food that smells bad. If you don’t notice a foul smell until you’re home and can open the package, call the store to ask about returning it. The USDA notes “there are no uniform or universally accepted descriptions used on food labels for open dating in the United States.” Use sight and smell to assess if food past its product date is still good to eat – but not your sense of taste, because even a little bite of a contaminated food can make you sick.

Also, avoid any packaged food that has a broken seal or wrap, and do not buy food in cans that have been dented or are bulging, as this may be an indication of bacterial contamination, which can be deadly.

2. Wash Fresh Produce — But Not Meat, Poultry, or Eggs

Fresh produce can be a surprising source of foodborne illness. Fruits and veggies can be contaminated by animals, their growing conditions, or the people they encounter before they end up in your kitchen, according to the U.S. Food and Drug Administration. Washing produce helps remove harmful bacteria like E. coli from the surface of fruits and vegetables. Even if you won’t be eating the skin or rind of a piece of produce, it’s important to wash it so bacteria on the surface doesn’t get transferred to the flesh by your knife when you cut into it.

To wash produce properly, the FDA recommends first removing and discarding any stems and parts that are bruised or damaged, then rinsing under running water. Do not use soap, bleach, or any commercial produce washes. Firm produce like melons or cucumbers can be scrubbed with a clean produce brush. Washed fruits and veggies should be dried with a paper towel or clean cloth towel. Do not wash meat, poultry, or eggs, as this can actually spread bacteria, according to the U.S. Department of Agriculture Food Safety and Inspection Service

When you’re food shopping, juices from raw meat, poultry, or seafood, which may harbor bacteria, can drip onto produce, increasing your risk of food poisoning from bacteria such as salmonella. The Partnership for Food Safety Education encourages separating foods that can carry salmonella from those that don’t – preventing the spread of illness-causing bacteria. The partnership recommends easy steps to stop cross-contamination: Put meat and fish in plastic bags before putting them into your shopping cart and separate them from your fruits and vegetables. Have them bagged separately at the checkout, too, and then store these foods apart in your refrigerator.

When preparing food, cut up produce first or use a different cutting board and knife for raw meats and fish, if possible. Don’t put cooked food back onto a plate that held raw food previously. And be sure to wash your hands, cutting boards, countertops, and utensils thoroughly with soap and hot water after handling raw meat, poultry, or fish.

4. Know the Temperature “Danger Zone” for Perishables and Prepared Foods

Pathogens start to grow in perishable items — including meat, dairy, seafood, eggs, freshly prepared foods, and anything else that has a label saying it should be refrigerated after opening, such as mayonnaise — at temperatures above 40 degrees F for cold foods, and under 140 degrees for hot foods. For that reason, the U.S. Department of Agriculture Food Safety and Inspection Service refers to that temperature range as “the danger zone.”

“A perishable item is still safe to eat if it’s been exposed to the temperature danger zone for less than two hours,” says West Passerrello. But, she adds, time spent in the danger zone is cumulative, so consider the amount of time perishable items spend in the grocery cart, at the checkout, in the car the trunk, and on the counter waiting to be put away.

The danger zone also applies to foods that are delivered to your home, such as groceries ordered online or meal kit deliveries. Be aware of how food is insulated in its packaging, and how long it’s sitting in a hot delivery truck or on your porch. If it feels warm to touch, it’s not worth the risk.

Another time the danger zone is important is during picnics and parties when food is sitting out for extended periods. Even cooked foods can grow disease-causing pathogens if they sit out too long, says West Passerrello. In general, food should not be left unrefrigerated for more than two hours, or one hour if the air temperature is 90 degrees F or more.

Handwashing before and during food preparation is crucial for preventing food poisoning caused by bacteria such as salmonella and E. coli, according to FoodSafety.gov. Regular soap and water is fine, but be thorough about getting the backs of your hands and under your nails. You should be spending at least 20 seconds, or the amount of time it takes to sing the Happy Birthday song twice, washing. Then make sure to use a clean towel to dry — one that has been used to wipe up spills may spread germs.

Be particularly careful about washing your hands after using the bathroom, changing a diaper, or picking up after a pet. Pets can naturally carry bacteria that are safe for them, but harmful for humans, according to the Michigan State University Extension Office. They recommend keeping pets out of the kitchen, especially off countertops, and washing your hands after snuggling or otherwise handling pets.

Wash cutting boards and countertops frequently, especially after they come in contact with raw meat, poultry, or fish. The Academy of Nutrition and Dietetics recommends keeping sponges clean and germ-free by microwaving them for at one minute or running through a hot cycle in the dishwasher, and washing dish cloths frequently in very hot water in the washing machine. Make sure both are completely dry (use a drying cycle if possible).

6. Marinate and Thaw Meats in the Refrigerator

When marinating foods, be sure to do so in the fridge instead of on the counter, where bacteria can multiply quickly, says West Passerrello. She recommends using a food-safe container and discarding any leftover marinade. “Do not reuse a marinade from raw meat or poultry,” she says, as it can easily be contaminated with pathogens.

Likewise, don’t defrost frozen meats by leaving them out on a counter at room temperature overnight, says Bucknavage. “Thaw it in the refrigerator,” he says. Some cooks recommend bringing meat like steaks up to room temperature before cooking them, and Bucknavage says that’s okay, as long as you don’t leave it out longer than the two-hour danger-zone window (less if the ambient temperature is above 90 degrees Fahrenheit).

Heat kills germs. Use a meat thermometer to determine the temperature of food when cooking. The U.S. Department of Health and Human Services runs a Food Safety Education website where it is recommended that ground meats, including beef, veal, pork, and lamb reach an internal temperature of 160 degrees F. Steaks of all kinds should be cooked to 145 degrees F. Poultry is done at 165 degrees F. For more on cooking foods to the right temperature, check out FoodSafety.gov.

READ ALSO: I’ve Been a Chef for Over 40 Years—These Are the Longevity-Boosting Ingredients I Cook With Every Day for the Most Delicious Meals’

When dining out, you can lower your risk for food poisoning by checking a restaurant’s inspection score with your state or local department of health as recommended by the Centers for Disease Control and Prevention. You can also look for certificates of food safety training displayed in the restaurant, and look to see if restaurant staff are handling food properly, and are not visibly sick. Make sure your food is fully cooked (avoid rare hamburgers and other partially cooked dishes). And ask if the restaurant uses pasteurized eggs, since raw eggs in dishes such as Caesar salad may contain salmonella.

When taking home leftovers, make sure you get them into the refrigerator within two hours after preparation to minimize the risk of food poisoning.

Keeping hot and cold food out of the danger zone is important when you’re traveling, too. When packing food for a trip, be sure to use coolers, insulated bags, and ice packs to keep food cold and avoid the chance of food poisoning, recommends The University of Nebraska-Lincoln’s Institute of Agriculture and Natural Resources. When traveling by car in hot weather, store food in the air conditioned passenger compartment rather than in the hot trunk.

If you can’t wash your hands with soap and water, USDA recommends cleaning them with a wet wipe or hand sanitizer before eating. These simple steps will minimize your risk of food poisoning and the spread of salmonella and other foodborne illnesses.