Home Family Health & Wealth I’ve Been a Chef for Over 40 Years—These Are the Longevity-Boosting Ingredients...
Facebook
Twitter
WhatsApp
Telegram 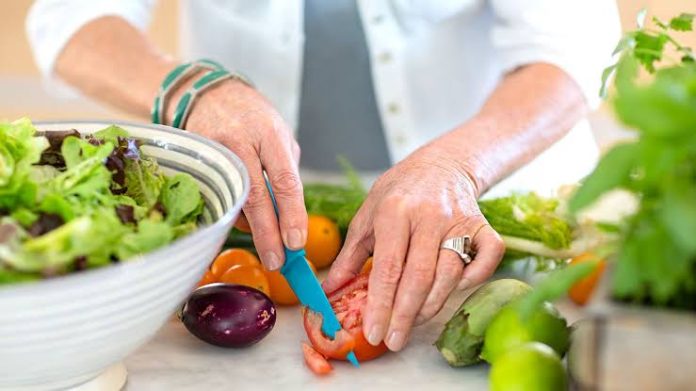 After 40-plus years working in professional kitchens, it’s safe to say that chef Peter George knows a thing or two about cooking. Like recipes in a family cookbook, this chef has collected memories, techniques, and knowledge about the culinary arts during his journey as a professional chef for the last four decades. Today, he works as a chef-instructor at the Institute of Culinary Education in Pasadena, California—where he seeks to inspire his pupils with the breadth of information he’s acquired throughout his career.

It’s no secret that working in a professional kitchen can be mentally and physically challenging. Chef George shares some of his best-kept secrets to staying on top of his game even as he grows older. Want a sneak peek? It’s a combination of a strong work ethic, a burning passion for his career, and, most importantly, a few longevity-boosting ingredients… basically, you can call it a recipe for success.

Chef Peter George has done it all. No, really. The French-trained chef began his career working in kitchens all across Europe—from the iconic Claridge’s hotel in London (where he served royalty) to the south of France (where he acquired a love for Mediterranean cuisine). After stints in northern Germany, Amsterdam, and Paris, the chef went stateside to work at high-end restaurants, country clubs, and hotels in places like Florida, Hawaii, and California. Now, for the last 22 years, George has been working with students to share his passion for the industry and the tricks of the trade he’s picked up along the way.

George shares a compilation of some of his favorite longevity-boosting ingredients he’s cooked with throughout his fruitful culinary career, which he says he will continue cooking delicious meals with no matter where his work takes him next.

After working in the Mediterranean for several years, George learned that the perks of ingredients derived from this region that go far beyond their delicious flavor. Indeed, some of his all-time favorite Mediterranean ingredients to cook with—namely, olive oil, tomatoes, garlic, and fresh herbs—pack a bevy of health benefits linked to longevity.

“One of the beauties of Mediterranean cuisine is how fresh everything is,” George says. While living in this region, he made use of the bounty of fresh foods at his disposal, including seafood, herbs, and vegetables. Years later, the chef still practices a largely flexitarian diet; he shares that he tends to consume dairy and seafood (like tuna or branzino) in smaller portions, and piles his plate with local fresh produce, grains, and healthy fats whenever possible.

2. Fresh fruits and vegetables sourced from the local farmer’s market

Chef George is a big proponent of eating with the seasons and grocery shopping for locally-sourced ingredients whenever possible. “As a culinary professional, I can’t stress the importance of shopping your local farmers market. The foods are just so much fresher,” he says. George notes that while he can find most foods year-round in California, they’re not going to be as fresh or ripe as would be ideal 365 days a year. So to find out what’s at its peak, he frequents the farmer’s market to both do his shopping and peruse the selection to decipher what he’ll want on his own menu for the week.

READ ALSO: GREEN TEA VS MILK TEA – WHICH IS HEALTHIER

“We tend to get everything year-round, but sometimes the quality is not always as good when you go to your local supermarkets. But at farmers markets, everything is seasonal, and you can see, smell, touch, and feel the freshness of the in-season fruits and vegetables,” George says. This deeper connection to the way foods are grown and understanding the importance of buying them fresh is one of the secrets he swears by that he says helps boost the quality and longevity-boosting benefits of his meals.

3. Homegrown fruits and vegetables from his garden

Though chef George is humble when it comes to his international travels and impressive resume, he’s quick to proudly admit that he has a green thumb. “I love gardening just as a hobby, but I also value putting a seed in the ground, seeing it grow, taking care of it, and harvesting that fruit or vegetable when it’s ready. So I’ve been doing it for 20 to 25 years now,” George says. The chef has over 13 fruit trees, which produce oranges, limes, papaya, avocados, apples, figs, and guava, to name a few. He’s also got multiple expansive garden beds with plants like tomatoes, cucumber, corn, bell peppers, watermelon, and herbs.

Aside from gardening being a fun pastime, George says it’s a way for him to know exactly what he’s cooking and eating—which means he stays away from pesticides and makes his own compost to use as fertilizer. “I like to collect all the scraps, like the vegetable peelings from all of the culinary classes,” he says, and combine them with egg shells from the pastry classes to add to his compost drum. He then lets “earth do its thing” as the worms from his worm farm help break down the compost to nourish his garden’s soil.

Like most other chefs, George can’t live without his spices. “I have a spicy tongue, so I like anything with a little bit of heat,” he says. This includes anti-inflammatory spices like cumin, ginger, and coriander, which he uses to season his foods to make them more delicious and easy to digest.