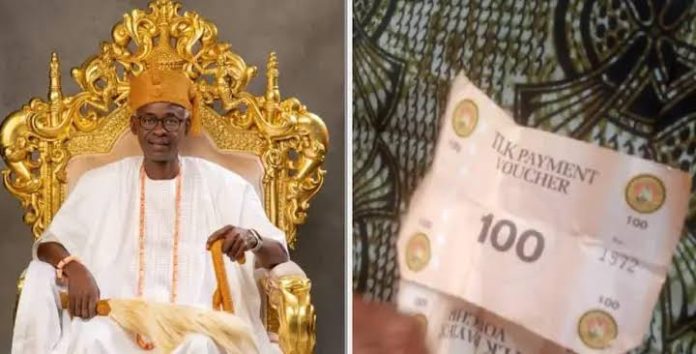 Inside a Community in Kwara , Where Residents Have Own ‘Currency ’

The Ijara-Isin community in Kwara State, North Central Nigeria has devised a means to keep money within its community in a bid to foster economic development.

Ijara-Isin came up with its own ‘currency’, which is accepted through out the community.

The Managing Director, Ijara Isin Development Fund and Corporative, Alo Oluwafemi, talks about the motivation behind the ‘currency’, also called vouchers, that residents of Ijara-Isin use when they go to the markets.

Oluwafemi said the Olusin of Ijara-isin, Oba Ajibola Ademola Julius, got the idea when he travelled to the United States of America in 2021.

READ ALSO: 🌻5 Things You Must Do to Excel at Work(HIGHLY RECOMMENDED)

He narrated that the monarch noticed that each time he gives out money or a job, the residents prefer to save the money in their accounts or use it outside of Ijara Isin which doesn’t help the community, so he thought of a way to keep funds within the community.

A community official, Akinleye Tolulope, said the idea is to boost the economy of the community. He also said that residents get paid with the ‘currency’ to discourage residents from taking the money out but rather spend it within the community to help in its development.

The cash officer, Ijara Isin Development Fund and corporative, Mukaila Abdulrahman, shares how the system of the voucher works. Abdulrahman said that the voucher must be signed and stamped to enable one to spend it adding that if a resident wants to change the voucher for cash, they are free to do so.

Oluwafemi added that when the market vendors collect the vouchers, they take it to the office where the vouchers are saved in their account and eventually turned to cash to enable the vendors restock.

READ ALSO: 🌻25 HARD things you can do to gain ‘unfair’ leverage in life(AMAZING WISDOM)

A trader, Babalola Omolara, said that the voucher has helped them in the community and that it is also a protective measure against theft as it is useless to whoever steals it from them.

Another trader, Oluwabukola Ojo, said that they receive cash from outsiders who want to purchase their goods.