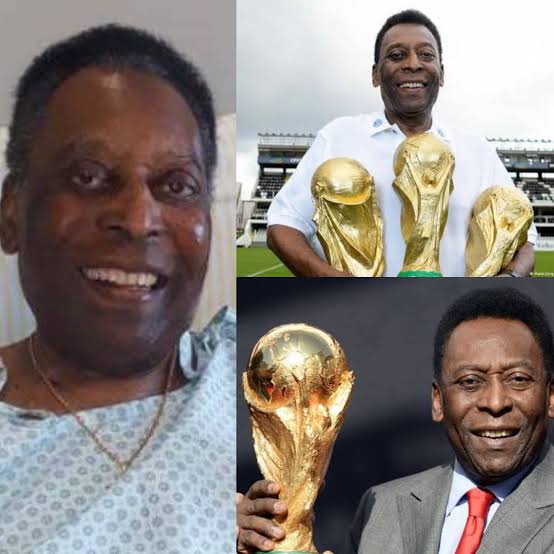 10 interesting facts you may not know about late Brazilian legend, Pele

Brazil football legend Pele, one of the greatest players of all time, has died at the age of 82.

The former striker, who is the only player in history to win three World Cups, passed away at the Albert Einstein hospital in Sao Paulo following a battle with cancer.

A message from Pele’s official Twitter account on Thursday read: “Inspiration and love marked the journey of King Pelé, who peacefully passed away today. Love, love and love, forever.”

Pele, who is Brazil’s joint all-time top scorer with 77 goals in 92 matches, became an icon of the game after winning the World Cup in 1958 as a 17-year-old, netting twice in the final to defeat hosts Sweden.

We outlined 10 interesting facts you may not know avout the late Brazilian Legend, Pelé

1. His father was a footballer

His father was also a footballer nicknamed Dondinho, whose claim to fame was scoring five headed goals in a match. Pelé came close with four headed goals against Botafogo but his father managed at least one footballing feat that his son couldn’t emulate.

Pelé was named after the inventor of the lightbulb, Thomas Edison. The young Edson “Pelé” Arantes do Nascimento certainly showed plenty of invention in his career and lit up many a football pitch with his skills.

3. A promise to his father

When Brazil lost the World Cup final to Uruguay in 1950, Pelé saw his father crying. “Don’t worry,” he told him. “One day I’ll win it.” Now that’s confidence!

4. He scored four goals on his debut

Pelé signed for Santos at the tender age of 15 and proceeded to score four goals on his debut against FC Corinthians. That’s one way to reward the scout’s faith.

The Brazil and Santos star wasn’t someone who was happy scoring just one goal. He scored 92 hat tricks, four goals on 31 occasions, five goals on six occasions and he once scored eight in a single match. If only Fantasy Football was around in those days.

6. He’s the only player to win three World Cups

Pelé is the only footballer to have been on three World Cup winning teams. Coincidence? We think not.

He ’s literally a national treasure. The Brazilian government declared him one in 1961 to prevent foreign football clubs from taking him out of the country.

Pelé got his nickname after his mispronunciation of the name of the Brazilian goalkeeper, Bilé, as Pelé. One of his classmates started to call him “Pelé” to tease him and the name stuck. We’re pretty sure his classmate hasn’t won three World Cups so it’s safe to say that Pelé had the last laugh.

READ ALSO: 4 Bizarre Things That Hold You From Succeeding (Stop Doing Them…

Pelé scored his 1000th goal on 19 November 1969, causing the day to be simply known as Pelé Day in Santos. We wouldn’t begrudge the legend a day of his own, in fairness.

10. From the pitch to the government

Pelé served as Brazil’s Extraordinary Minister of Sport between 1995 and 1998. He also served as a United Nations ambassador for Ecology and the Environment. We’re not sure what his qualifications were but we’d give him the job without a second thought. He is Pelé, after all.