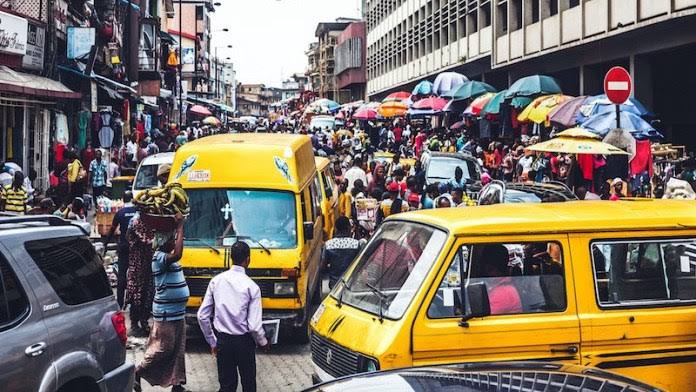 Fastest Growing Sectors in the Nigerian Economy as of Q3 2022

Nigeria’s transportation and financial sectors led the list of the fastest-growing sectors in the third quarter of 2022, printing real growths of 41.59% and 12.7%, respectively.

This is contained in the Q3 2022 Gross Domestic Product (GDP) report released by the National Bureau of Statistics (NBS).

The Nigerian economy expanded by 2.25% in real terms year-on-year in Q3 2022, largely due to positive movement in the non-oil sector. However, the growth was at a slow pace compared to the previous quarter (3.54%) due to local and international constraints.

Meanwhile, in broad sectoral disaggregation, fifteen of the nineteen sectors recorded a year-on-year positive growth, while four of them printed contractions. The sectors with negative growth in the period were manufacturing (1.91%), other services (2.67%), electricity (3.56%), and mining and quarrying (21.31%).

Sectors in recession: An economy is said to be in a recession if the aggregate GDP declines for two consecutive quarters. Two sectors remained in recession in broad sectoral classification. They are:

The electricity, gas, steam and air conditioning supply sector recorded a 3.56% contraction in its GDP, following an 11.48% contraction in Q2 2022 and an 11.2% decline in Q1 2022. The sector has maintained negative growth in the last three quarters, despite recording impressive growth rates in the previous year.

The mining and quarrying sector recorded a 21.31% contraction in the review quarter, on the back of an 11.09% contraction recorded in the previous quarter. The sector has been on a negative trajectory since Q2 2020 largely due to the performance of the crude petroleum and natural gas sector.

The Nigerian oil-producing sector has been bedevilled by the volatility in the global crude oil market, and the inability to produce at full capacity as a result of oil theft, vandalism, insecurity, and investment flight amongst others.

In terms of subsectors in recession, the oil refining sectors printed a 44.7% decline in Q3 2022 following the 42.12% decline recorded in Q2 2022. Textile, Apparel and footwear, rail transport and pipeline recorded negative GDP growths for at least two successive quarters.

Below are the fastest-growing sectors in the Nigerian economy for Q3 2022.

Transport and storage (41.59%): The transportation and storage sector of the Nigerian economy grew by 41.59% in Q3 2022, representing the fastest-growing sector in the largest African economy. It however grew at a slower pace compared to the previous quarter due to the contraction of the rail transport and pipeline subsector.

Air transport grew by 14.58%, transport services expanded by 6.66%, while post and courier services recorded a 5.36% year-on-year growth in real terms.

Finance and insurance (12.7%): The financial and insurance sector expanded by 12.7% year-on-year in real terms in the third quarter of the year, albeit slower than the 18.48% growth recorded in the previous quarter and the 23.24% growth printed in Q1 2022.

The sector accounts for 3.49% of the national economy, with a quarterly estimate of N660.8 billion and an estimate of N2.9 trillion.

In terms of breakdown, the financial subsector, which accounts for about 90% of the sector grew by 12.03% year-on-year from 20.06% recorded in the previous quarter.

The insurance subsector on the other hand printed a 19.09% year-on-year growth, outpacing the 6.96% recorded in the previous period.

The telecommunication sector, which consists of some of the largest companies in the country and accounts for 83.7% of the ICT sector grew by 10.53% year-on-year from 6.55% recorded in the previous quarter.

The Publishing subsector printed a 12.06% growth in the quarter under review compared to the 3.43% growth recorded in Q2 2022. Motion picture, sound recording, and music recorded 22.41% growth, while broadcasting printed a 6.58% year-on-year growth. 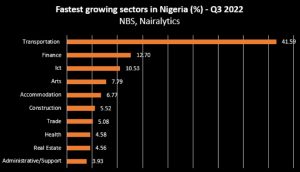 READ ALSO: I’ve Been a Chef for Over 40 Years—These Are the Longevity-Boosting Ingredients I Cook With Every Day for the Most Delicious Meals’

What You Should Know: Nigeria’s gross domestic product (GDP) grew by 2.25% year-on-year in real terms in the third quarter of 2022, a contraction when compared to the 3.54% growth recorded in the previous quarter.

The oil sector contributed 5.66% to the real aggregate GDP in Q3, a decline from its 6.33% contribution in the previous quarter.