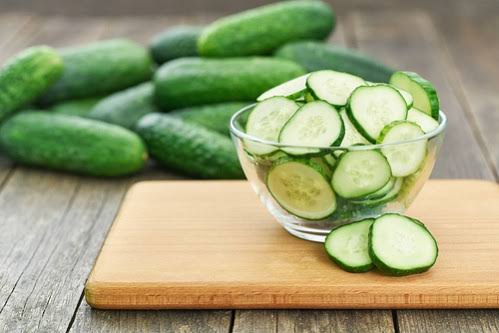 As you crunch on cucumber in your salad, there are numerous health benefits associated with eating cucumbers that you may not even realize. However, there are also some other side effects to be more cautious about, especially if you have any stomach issues. Here’s what you need to know.

1. It could lower blood pressure.

A 2017 study, showed a decrease in blood pressure after drinking cucumber juice. Though the sample size was small—just 20 participants 60 years old or older with high blood pressure—the findings were very pro-cucumber. The participants drank one cucumber blended in water twice a day for seven days. The study showed a “significant effect” of cucumber juice on lowering blood pressure in the age group. While cucumbers aren’t traditionally included in smoothies, this could be a reason to juice up a cucumber today. Cheers!

2. It can help prevent diabetes.

When trying to avoid diabetes, it’s best to begin fine-tuning your diet—avoid highly processed carbohydrates, skip out on sugary drinks, and limit red meat, according to Harvard Health. In addition to those dietary choices, it’s also important to start eating more foods with a low glycemic index (GI). GI is a number assigned to different foods, ranging from zero to 100. The higher the glycemic index is of a number, the more a person’s blood sugar will rise after eating it. Cucumbers have a glycemic index of 15, making it a food with a relatively low number.

Eating foods with a low GI can help reduce insulin resistance, which in turn helps reduce the risk of type 2 diabetes, according to Nutrition Journal.

Thinking about investing in a 64-ounce water bottle? Forget about it. All you need to be more hydrated is to snack on some cucumber slices and you’re set. Well, maybe you should still get the water bottle, and continue to drink water, but that doesn’t take away from cucumbers being a source of hydration.

According to a French and British population survey published by Nutrients, cucumbers are more than 95% water—which means that in addition to a crunchy snack, you’re also getting hydrated in the process of eating cucumbers.

“They can help contribute to your overall daily fluid intake and keep you feeling hydrated and your body functioning optimally,” says Registered Dietitian and Certified Nutrition Support Clinician Kristin Gillespie.

There are a number of routes that people looking to lose weight take when it comes to making adjustments to their diets. One step that should be taken is adding in cucumbers, not only because they offer a great crunch into a variety of dishes, but also because they’re a healthy food that helps to promote weight loss.

There are only 16 calories in one cup of cucumbers, which means that the food has a low energy density. According to a Nutrients study focusing on food energy density, there is a link between consuming foods with lower energy densities and weight loss.

Additionally, due to their high water content, cucumbers are extremely filling while remaining low in calories, making them a great snack for anyone looking to lose weight. Especially if you pair them with a filling healthy dip, like hummus or guacamole!

With all of the water and fiber that you find in cucumbers, is it any wonder that they help to prevent constipation? In a study published in Fitoterapia from Jadavapur University, it’s said that the seeds of the cucumber, of which there are many, help to “prevent constipation.” Additionally, they have a “cooling effect” on the body, according to the study.

While a positive of eating cucumbers is that you can avoid constipation, a downside is that cucumbers can also result in some excess gas.

According to UC Davis, cucumbers contain cucurbitacin, a compound found in other fruits and vegetables including pumpkin, squash, and watermelon. Cucurbitacin results in the bitter taste found in cucumbers, and also is the cause of gassiness and indigestion. These uncomfortable symptoms may occur if you eat too many cucumbers at a time.

7. It can prevent bloating.

With their high water content cucumbers are amazing at keeping you hydrated, but they’re also great at helping to eliminate excess water retention as well, which means that you’ll avoid bloating after eating cucumbers.

Richards says they’re good for a host of other stomach issues as well.