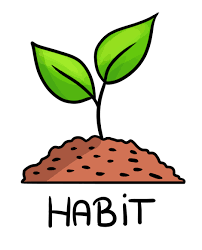 Making a habit of exercising, making your children eat their vegetables, or sticking to your New Year’s resolutions — it can all seem so difficult sometimes. But if you want to change your life and make better habits stick, it’s important to understand the principles that drive habit formation and change, as well as some powerful ways to put those principles into action in your own life. I would like to share with you 4 laws of atomic habits that will help you create new habits and stick to them forever!

Law 1: A habit starts with a cue

A cue is a trigger that tells your brain to go into automatic mode and which habit to use. For your new behaviour to be automatic, it needs to follow cues that you already have. If you don’t know what triggers your habits yet, try tracking them for a week by writing down all of your habitual actions in a journal. Anytime you realize that you’re doing something automatically, note down what happened right before it (the cue) and how you felt at that moment (the reward). This will help you get more in touch with your cravings so that you can make healthier choices going forward. After a few weeks, you should start to see patterns emerge — perhaps there’s one particular time of day when you always feel like eating junk food or maybe certain social situations consistently lead to bad decisions. These are good places to start experimenting with replacing old habits with new ones. To start developing an exercise habit first, identify when and where you would naturally exercise if it were easy for you — maybe early in the morning or after work — and then build out those routines until they become natural and automatic too. Once your workout becomes part of your routine, change up your cues by adding some variety: instead of always working out after work, try exercising at different times during the day or varying where you work out from day to day.

Law 2: The cue must connect to a routine

A cue tells your brain what to do next. But unless that cue triggers a routine, it’s not going to get you anywhere. This is why most diets don’t work. They set a goal but don’t give you any way to achieve it (other than willpower). You can change your behaviour by creating connections between cues and routines. For example, I go to sleep at 10:30 PM every night because that is my cue that it is time for bed. My routine is brushing my teeth, putting on pyjamas, and reading in bed until I fall asleep. By doing these things in order every night, they have become linked together in my mind as one cohesive unit — and so when I finish reading, it signals to me that it’s time for bed. The key here is repetition — the more often you perform a certain action after a certain cue, the stronger that association becomes. Eventually just thinking about one thing triggers another — you think about dinner and then automatically start thinking about where you want to eat or what you want to eat or who you want to eat with…even if those thoughts are random! To create associations between your goals and existing behaviours by repeating them together over time until they become automatic.

Law 3: The routine must be something you do regularly

Anything worth doing is worth doing every day. Routine not only helps you get into a mental groove. But also increases your odds of success. The more often you do something, and for longer periods, the better you’ll get at it. This law reinforces why consistency is so important to habit change: It increases how much practice you get in each instance, which makes each instance easier to do again in that environment the next time around. Consistency gives habits a repeated chance to build associations with cues until they’re hardwired into our behavioural repertoire. When we repeat an action long enough, it becomes a habit and moves from deliberate intention to automatic behaviour. So when I say do something daily, I mean it literally: Every single day. But keep in mind that what you do daily doesn’t have to be exactly what you did yesterday — it just has to be similar enough to allow your brain and body to get good at whatever it is overtime. For example, I like going for walks on weekdays because I live close enough to my office that walking there would take less than 20 minutes (including walking back). If I went on weekends instead of weekdays, though, my walk would likely be slightly different (on average) because most people travel differently on weekends than they do during the workweek.

Law 4: Create an incentive that drives the habit

According to Dr. BJ Fogg, habit formation isn’t so much about forming a particular action as it is creating an incentive to take action in a certain way. If you want to be more active or eat less junk food, you can create an incentive like putting money on your credit card for every gym visit or for every healthy meal you consume. If you don’t reach your monthly goal, you lose that money! Creating these types of incentives will help change bad habits into good ones (aka atomic habits). Once you’ve created a system that incentivizes good behaviour, it will become automatic and therefore easier to do than not doing it.

READ ALSO: 7 things you need to build your wealth