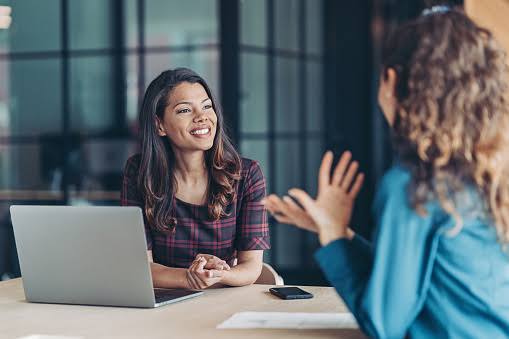 5 Red Flags In a Job Interview.

“This is a fast-paced environment.”

It’s easy to forget this, especially when you’re eager to find your next opportunity.

But if you forget to interview your interviewer, you risk accepting a job that’s not a good fit for you.

It happens all the time.

It happened to me.

But if you watch for these 5 red flag scenarios and phrases in a job interview, you’ll be better equipped to spot and avoid a bad fit:
“We work hard and play hard.”

We work really long hours, either because our clients are unreasonable with their expectations, or because we work harder not smarter, in general. Or both. But don’t worry because we drink alcohol after work and that’s really fun!
I’ve NEVER worked or interned at a company that said this phrase in my interview when describing the company culture and didn’t unintentionally promote unhealthy drinking habits.

There’s nothing wrong with social drinking unless:

it’s being abused and, thus, causing harm to someone, OR
it’s being used as a coping mechanism.
This phrase kills those two birds with one stone.

So, if you hear this phrase in your interview, ask yourself if you’re willing to work at a company that drives you to drink (more).

“This is a fast-paced environment.”

Be prepared to be underwater as soon as you walk in the door. You’re about to have more work than you know what to do with under deadlines that’ll stress you the f**** out.
Fast-paced sounds cool, in theory.

It sounds like you get to task-switch and work on all these cool things.

But be wary of this phrase because for me, it’s often meant that a typical workday means drinking from a proverbial firehose.

I’ve never been one to shy away from work, no matter how much there is. It’s what I’m being paid to do, and it helps the workday go by quickly.

But this phrase often comes with really tight deadlines that make it more stressful than anything else.

“Some nights and weekends are required.”

We will have no hesitation in asking you to give up your off hours. If you think about it, Saturday is just an extension of Friday. And Sunday’s basically Monday anyways. So, if you have plans on any of those days, definitely cancel.
My contract at my last job mentioned that occasionally, I may be on-call.

I thought nothing of it because, as a fresh college grad, I just assumed it wasn’t true.

My first day on that job, I did hourly reporting until 10 pm.

I’m a team player who is okay with giving up occasional nights and weekends for my team.

But I’m not a team player who’s willing to completely overhaul my life for my team.

If you’re not willing to overhaul your life for a job, ESPECIALLY one that doesn’t even pay you overtime, be wary of this phrase.

You don’t understand what’s being asked of you.

If, during your interview, you talk with the manager of the position you’re applying for and you don’t understand what’s being asked, there’s a communication problem.

But it does mean that you and your potential future manager don’t have complimentary communication styles.

This sets the tone for how you’ll work together if you get hired. If the interview questions and explanations don’t make sense, the directions for the tasks you’ll have to complete once you get the job won’t make any sense to you either.

I interviewed for what was pretty much a sales role. The job description didn’t read that way. But the interview made it clear that that’s what it was.

Unfortunately, that was the only thing that was clear in the interview.

During my interview for this company I’m currently working for, I asked each of my interviewers some of the same questions.

The first question is personal. Expect different answers because we all value different things.

But for the second question, I was shocked (and very pleased) to have gotten the same exact answer from everyone, delivered in their own way, of course.

So either they rehearsed, or the answers were true. Look for inconsistencies in the job interview.

During the time I was interviewing with my current company, I was in the final rounds of interviews at another company I was also interested in.

But the only consistent theme that came out when I asked about the team’s work dynamics was:

We don’t communicate, so people often duplicate efforts.
Yikes. That’s consistency, but not the kind I was looking for.

Pass!
Job searching can feel like a full-time job on its own. And it can be so easy to jump at the first offer that pops up.

But do yourself a favor and weed out anything that’s not a good fit.

Don’t accept a job offer just to have a job.

Accept a job offer because you genuinely feel like you’ve found the right opportunity.