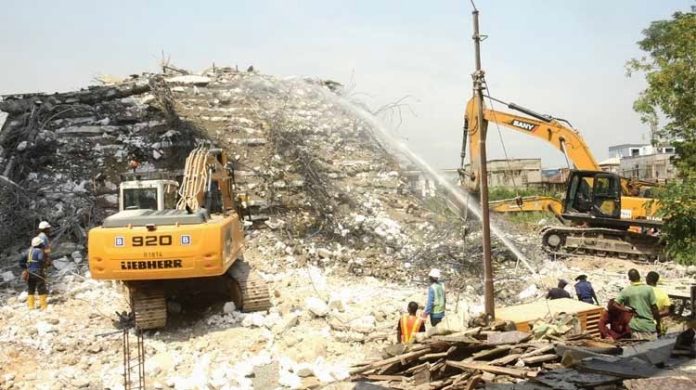 Twenty people have been confirmed dead while nine were rescued with dozens more still missing after a 21-storey building collapsed recently on Gerrard Road, Ikoyi, Lagos.

The state government vowed Tuesday to probe the incident and punish any indicted persons who had a hand in the building collapse.

The building was part of a complex named 360 Degrees Towers, which was intended to house luxury apartments, town houses and penthouses, according to the developer’s website, which has since been taken offline.

The housing scheme is being developed by Fourscore Homes Limited, which has a portfolio of projects in the UK, US, South Africa, and other parts of Nigeria.

The Ikoyi building collapse is not the first in Nigeria as between 2005 and 2020, 152 buildings fell down in Lagos, according to research by planning expert Dr Okunola Olasunkanmi.

More than three-quarters were residential properties, many multi-storey.

One of the worst incidents, in 2014, saw a six-storey building collapse during a service by celebrity televangelist TB Joshua, killing 116 people.

In many cases, unqualified or unskilled builders were used along with substandard building materials, Dr Olasunkanmi says in an article in the Conversation.

Adequate foundations can be costly.

They can cost up to half the price of a building, professor of civil engineering Anthony Ede at Covenant University in Ota, Nigeria said in 2016.

He said two things should be considered when building the foundations – the solidity of the soil and the heaviness of the building and its contents.

But he said developers save money that should be spent on foundations when building on the city’s swampy ground and many buildings had collapsed in the city as a result.

Even on solid ground, foundations need to be strong enough for the load.

Inadequate foundations for a four-storey building was one of three reasons given by investigators for a building collapsing in northern Rwanda in 2013, killing six people.

Materials that just aren’t strong enough to withhold the load are sometimes used, Hermogene Nsengimana from the African Organisation for Standardisation said in 2016, as its organisation met in Nairobi to discuss why so many African buildings collapse.

He suggested there was a market for counterfeit materials – going as far as to say that sometimes scrap metal is used instead of steel.

Even when workers are given the right materials to make the concrete, they might mix them incorrectly, said Mr Ede.

This results in concrete which is not of the sufficient strength to hold the load.

He accused developers of cutting costs by employing unskilled workers who are cheaper than trained builders.

This was one of the reasons put forward by civil engineers Henry Mwanaki Alinaitwe and Stephen Ekolu to explain why a building in Uganda collapsed in 2004.

Their research showed that the workers misunderstood the mixing ratios of the concrete.

It suggested that people used wheelbarrows instead of measuring gauges to measure cement.

“You find bricklayers and even technicians calling themselves engineers,” cautioned the president of the Nigerian Institution of Structural Engineers Oreoluwa Fadayomi in an interview with The Punch.

To those who want to save money on professionals, he advised: “One should not be penny wise and pound foolish”.

Mr Ede said a building collapses when the load is beyond the strength of the building.

He gave the example of asking a baby to carry a heavy box: “The baby will not be able to withhold the strain.”

Even if the foundations and the materials are strong enough for what they were originally built for, that purpose may change.

So, Mr Ede said, if a building was designed to be a home and is then turned into a library where boxes and boxes of books are piled up, the building may strain under the weight.

He said another reason why the load was often heavier than the original design was because extra storeys are added.

In March 2016, an upmarket apartment block which had more storeys than planned collapsed in Lagos, killing 34 people the Guardian reported.

This came two years after a church accommodation for the famous preacher TB Joshua collapsed, also, authorities said, because it had more floors than it could hold. In that case more than 100 people lost their lives.

At all points of construction the strength of the building should be tested, said Mr Ede.

“You have to be strict,” he said, about policing building.

“The law says you must test. It’s the enforcement of the law which is the problem,” he said.

That’s a big problem, he said, when at every stage of construction there is someone with a strong motivation to save money or take money.

There are many physical reasons a building can collapse but only one driving motivation for that to happen, said Mr Ede. That’s money.

And for him this is the real reason buildings collapse – corruption.

The story doesn’t end there.

Just because unsafe buildings are constructed, it doesn’t mean anyone has to die – the buildings can be knocked down.

And that is what does happen next.

But things go wrong in those situations too, leading to loss of life.

There are cases when buildings condemned as unsafe and marked for demolition still have occupants.

The Lagos State Building Control Agency (LSBCA) had marked a building as distressed in 2017, and had remained empty but then “the recalcitrant owner renovated the building with gravel as granite without carrying out a thorough engineering appraisal and integrity test on the structure and let it out for use.

It was a four-storey, multi-purpose building with a primary school on the top floor.

One reason why residents didn’t listen to the Lagos State government order was given by engineer Felicia Nnenna Agubata.

She told the BBC’s Newsday programme that building inspectors were not backed up by security officers who can enforce evacuations.

So they can ask nicely, but those requests are often ignored.

Two days after the school collapsed, the LSBCA started the process of demolishing about 100 buildings that had failed structural integrity tests.

How can I get a permanent residence in the UK?