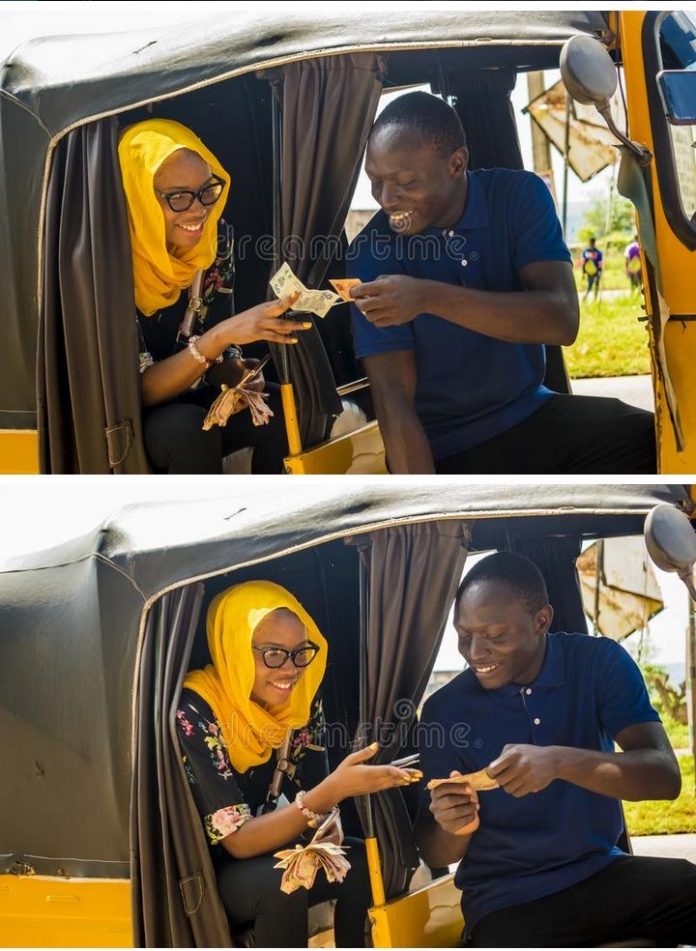 Dayo and Rukayat Studied Engineering at a University in kwara State. They were both Classmates and after Five years of Studying hard, they both graduated. After graduation, Fate took them through different paths of life.

5 Years later, Rukayat after much frustration of securing a job, ended up as a Secretary in a Building firm earning 50,000 Naira monthly.

Meanwhile, Dayo on the other hand, couldn’t Secure a Job and ended up a Taxi Driver, He makes At least 5,000 daily and if he works for only 20 days in a month, He makes 100,000 Naira that month.

One Evening, Rukayat closed from work and was at the bus stop waiting for taxi when Dayo stopped. She hopped in when she discovered the taxi was going her way but little did she know it was Dayo. All through the journey, she was lost in her Phone.

She reached her bus Stop and after alighting, just when she was about paying, she took a look at the driver and their eyes met, wow! They were both happy.

“Is this you?” they both asked themselves simultaneously as if they planned it. Rukayat gave him money but Dayo insisted she keep it. He was happy to see her and for old time sake, he left the money for her even when she insisted that she wanted to pay. They both exchanged contact and left.

Well, Rukayat went home that night and was lost in thought. Not as if Dayo was looking bad but Dayo driving Taxi? She couldn’t wrap her head around it. She Pitied him. Felt Sorry for him. If Dayo had allowed her she would have paid him and beg him to keep the change.

Little did she know that, Dayo actually has another Taxi running for him, He is a Land owner and he is planning on developing it soon. But because he was driving a Taxi, She felt Pity for him.

On the other hand, Dayo felt sorry for himself too. Before he slept that night, he remembered Rukayat, how neatly she dressed and nice she smells, “She must be earning over 300,000 Naira per month” he said to himself. He felt ashamed, He felt like a failure and he felt she was way ahead of him financially and otherwise.

Little did he know that, If Rukayat removes the transportation fare and feeding money from her monthly salary, it will take her at least 3 Months to earn what he earns monthly.

Sadly, this could be some of our reality, you measure your progress and success with that of your friends, Classmates and Relatives even with very limited information you have about them.

Stay Focused and Face your life. It’s not a competition. Stop Comparing things, you don’t have the full picture. Every one is running on his own lane. Be contented.

READ ALSO: The story of the richest person in the world